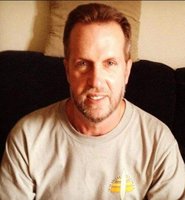 Steven had a great sense of humor and touched many lives.  He was devoted to his girls and cherished spending time with his granddaughters.