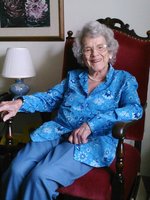 Alice MacMillan Dalton of White Horse Village, Newtown Square, PA, passed away on Friday, March 6, 2020, at the age of 104, having lived a long and happy life. Alice was born on June 25, 1915, in Wilkinsburg, PA, just outside of Pittsburgh, the daughter of Merle & Mary Alice MacMillan. As a young child, Alice and her parents and siblings Ruth, Robert, and Donald moved to Essington, PA, and later to Prospect Park, PA. She attended Prospect Park High School (now Interboro High School) and graduated one year early in 1932. She then attended Temple University, graduating with a Bachelor of Arts degree in 1936. After graduation she worked in various positions with Bell of Pennsylvania and Strawbridge & Clothier until her marriage to Clyde E. Dalton on November 22, 1941. Alice and Clyde had three children: Robert, Richard, and Susan. While raising her children, Alice began her career as a teacher. She taught Spanish and French at Sun Valley High School in Aston in the 1960s and 1970s, eventually becoming the language department head. After retiring from education, Alice continued her volunteer work. She tutored reading for the Delaware County Literacy Council and was a reader for the Radio Information for the Blind in Philadelphia. Alice was also active in the Women’s Association of the Media Presbyterian Church. Alice and Clyde moved to White Horse Village in October 1989, among the first residents to do so. There they continued their lives traveling, gardening, and volunteering. After Clyde’s death in November 1995, Alice became involved in attending to those in hospice. Alice is survived by her son Robert and his wife Karen Dalton of Claremont, CA; son Richard and his wife Patricia Dalton of Wolfeboro, NH, and Vero Beach, FL; and daughter Susan of Newtown, PA. Alice is also survived by her beloved niece, Pat Burgess of Narberth, PA; her nephews Jim Jolly and Dale Jolly and his family; her many nephews and nieces and their families in Connecticut; and 5 grandchildren and their spouses: Sean & Julie, Chris & Megan, Keith & Liz, Amy & Sphinx, and Ellen & Alex. She is also survived by 10 great-grandchildren: Mikaela, Bronte, Chaney, Everett, Rylee, Rowan, Jacob, Layla, Bessem, and Elias; as well as many grand-nieces and grand-nephews. A private service will be held. In lieu of flowers, please consider a contribution to the White Horse Village Employees Fund. The family would like to sincerely thank White Horse Village for their loving care of Alice.