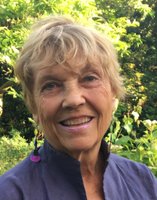 Mary McCanny Gergen died peacefully in her Wallingford home on September 22, after wrestling for a fourth time with cáncer. She was 82. Mary was born in the small prairie town of Balaton, Minnesota, where Saturday afternoon at the movies fired her imagination of what life could become. The possibilities began to open when her family moved to St. Louis Park, in Minneapolis. She was a star high school student, and went on to receive a Phi Beta Kappa award at the University of Minnesota. She remained to earn an MA in Educational Psychology, and later earned a PhD in Psychology at Temple University. For the major part of her professional career, Mary served as Professor of Psychology and Women’s Studies at Penn State University (Brandywine). In addition to winning awards for her teaching, she was an active scholar and feminist advocate. Her work especially emphasized the ways in which the idea of gender is created or constructed in social process. Her book,"Feminist Reconstructions in Psychology," is a significant expression of her ideas. Mary also challenged the narrow visión of traditional research methods. Although teaming with Swarthmore Professor Gudmund Iversen in their book, "Statistics, A Conceptual Approach," she believed that the concept of research should be expanded in order to serve multiple purposes. Here she championed arts-based research practices, with her book "Playing with Purpose," a major vehicle of expression. Many of these interests were reflected in her joining with colleagues to found the Taos Institute, a non-profit educational organization, exploring the practical potentials of social constructionist theory. With the Institute, she was pivotal in forming a PhD Program, and a publishing wing. Her warm and welcoming presence was also instrumental in attracting some 700 Associates from around the world into Institute activities. She married Swarthmore College professor, Kenneth Gergen, in 1969 and they worked closely together on many writing projects, and as joint founders of the Taos Institute. These projects also included the creation of the "Positive Aging Newsletter," an electronic publication that emphasizes the positive potentials of later life. Inspired by her own bright vision of aging, the newsletter is read by thousands, and is translated into six languages. Mary’s childhood fantasies also lured her husband to arrange sabbaticals and study visits in Rome, Paris, Kyoto, Heidelberg, Buenos Aires, Nanjing, and Wassanar in the Netherlands. Sustaining her Irish heritage, Mary carried on an active social life, organizing lively dinner parties, eccentric dance parties, and helping her children host an annual music fest in her garden. She performed in several faculty plays at Swarthmore College, and could often be found with her friends on the Swarthmore tennis courts. On the more serious side, she served for many years as an ombudsman for the Pennsylvania Prison Society. She is survived by five children, Lisa Scintilla (Nick), Michael Gebhart, Laura Pennington (Neil), Stan Gergen (Lisa), and Antonia Gergen, and by four grandchildren. In lieu of flowers, donations may be sent to Emily’s List, P.O. Box 96612, Washington D.C. 20077 and/or ABC House, 307 N Chester Rd., Swarthmore, PA 19081. A celebration of Mary’s life will be scheduled in the Spring.