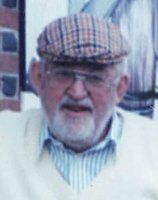 David C. Grace, 87, of Parkside, PA, passed away peacefully at home surrounded by his loving family on Sunday, October 11, 2020. Born in Chester, PA on July 15, 1933, he was the son of Nellie and Kirkman Grace. He and his sister Kirklyn had a happy childhood and enjoyed spending time with his closely-knit family of aunts, uncles, and cousins. Dave was a 1951 graduate of Chester High School and took engineering classes through Penn State University. He was employed at Weirs Company in Chester, PA completing drafting and engineering projects for about two years. He then went on to have a long and successful career with Litton Industries as a Draftsman/ Designer. His work was mechanical and electrical engineering design for military contracts. He designed intricate speedometers and wind speed indicators (anemometers) for military airplanes, helicopters, and even the space shuttle. He found his work very fulfilling and even took the initiative late in his career to learn and become proficient in Computer Aided Drafting (CAD). Dave encouraged two of his children, Maryellen and Carol, to pursue degrees in engineering and mathematics. Dave proudly served his country in the army for two years, stationed at Fort Hood in Texas. He told countless stories about his duties and army days. In addition to his loving wife Ellen of 62 years, Dave is survived by his children Amy Oster (Joe), Maryellen Saylor (Tom), Jennie Dunnigan (Stuart), Carol Storm (Bill), and David Grace and grandchildren Madison, Amanda, Joey, Tommy (Catherine), Laura (John), Todd, Jake, Patrick, Joel, Katie, Jen, Billy, Ben, Ali, and great-granddaughter Maya. He is also survived by his sister, Kirk, and his niece Gail (Dave), nephews Steve (Christine), Will, and Sam. He is predeceased by his parents Nellie and Kirkman Grace. Dave and his wife Ellen raised 5 children and watched their family grow to 14 grandchildren and 1 great-granddaughter. Dave always made a point to outwardly show the love and pride he had for his family, acknowledging the character, talents, and educational pursuits of each one. He has been a strong presence at family gatherings and took such pride in his family’s close bonds and the obvious joy his grandchildren experienced while spending time together. His family was his greatest love and best accomplishment. Dave was a wonderful father and grandfather, investing time, love, wisdom, and guidance as his children grew. He instilled a strong sense of family by example. He enjoyed family vacations in Jamison City (the mountains), Wildwood and Cape May, NJ teaching us to ride the wave, and day trips to the Philadelphia Zoo, Hershey Park, and various museums. Dave was a believer in Jesus Christ. He attended church and weekly Bible studies. He often said that he found God in nature, walking through fields and forest, swimming in the ocean, gazing at the mountains, fishing in streams and lakes, and enjoying arboretums. Some of Dave’s favorite activities included cheering on the Philadelphia sports teams, often yelling “Let’s go you Eagles!”, as well as golf, sailing, hunting with his father and uncles, and fishing. He also loved his trips to Ireland, most especially the Cliffs of Mohr and Galway. His home was decorated with all sorts of Irish items and pictures and he even had his very own Irish penny whistle. Dave was a lover of all different types of music; Irish, Country, Blues, and Classical. He attended concerts to see Phil Coulter, Cahal Dunne, Neil Diamond, Chuck Berry, and watched Jim Croce perform live at the Paddock. He was a member of the Chester County Historical Society as well as the Cape May County Museum/ Genealogical Library where he researched and explored genealogy. Dave was an avid reader and writer. Some of his poems were published in his company newsletters. His family enjoyed reading and reciting his poetry collection alongside him, most especially the ever-amusing Leprechaun Soup and Thanksgiving. The Grace family would like to thank Melanie Arnold, who became part of the family as Dave’s head caregiver, in addition to caregivers Warren, Fred, Jamila, Nichole, Nicole, and Linda for all your kindness and care. You have been a huge blessing to Dave (Papa) and each of us. He enjoyed your camaraderie and attention. We would also like to thank the Coatesville Veterans Administration for all the benefits they provided Dave, and Holisticare Hospice who guided us in his final weeks. Visitation will be held on Tuesday, October 20, 2020 at 10:30 at Minshall Shropshire-Bleyler Funeral Home, Ltd., Middletown (Rte. #352) & Knowlton Rds., Middletown Twp., Media, PA 19063, with a Funeral Service following at 11:30AM and Interment with Military Honors at Edgewood Memorial Park. Due to the COVID-19 pandemic, face masks will be required. Guests are kindly encouraged to be mindful of social distancing practices while in attendance. In lieu of flowers, donations may be made in memory of Dave to the Christian Appalachian Project or The American Diabetes Association.