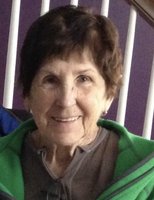 She was employed by Town Talk Newspapers for 10 years and later by Avon Grove School District in the cafeteria, until her retirement.

Betty was a parishioner of Assumption BVM Parish, West Grove, PA, where she had previously helped with their Summer School Program.

Most of all, Betty was devoted to her home and family.

Funeral Mass: Tuesday, April 6th at 11:00AM at the Church of Assumption BVM.

In lieu of flowers, memorial donations may be made to: Little Sisters of the Poor, 5300 Chester Ave., Phila. PA 19143 or the above named church.