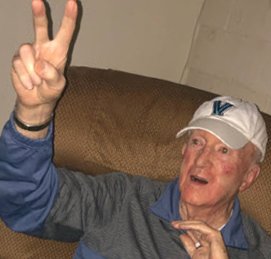 John J. Bogan, Sr., age 92, of Brookhaven, PA, died Sunday, August 8, 2021. John was born June 22, 1929.  He was a graduate of West Catholic High School, where he played football and was named All-Catholic and All-City Co-Captain, setting individual scoring records. After high school, John accepted a full scholarship to Villanova University, and played defensive end.  The team won 2 championship bowl games. He was a Veteran of the National Guard.

John was employed as a Benefits Administrator with United Food and Commercial Workers and then after retirement, he worked part time with Main Line Today Magazine.

He was a parishioner of the Church of Our Lady of Charity, Brookhaven, PA.

Memorial Donations may be made to:  American Heart Association https://www.heart.org