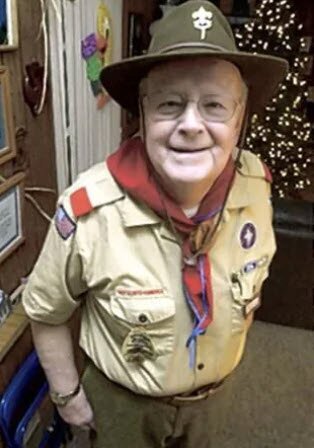 Frederick W. Sach passed away on Wednesday, April 6th surrounded by family at Riddle Memorial Hospital in Media, PA. Over the past few years, Fred’s determination and resilience was apparent through a multitude of illnesses, being cared for by his devoted wife, Jeanne, of 58 years.

Fred would be the first person to tell you how much he loved being husband, father, mentor, and friend, and how truly blessed he was. He had an infectious sense of humor and quick wit, while being the finite definition of a good man. All that knew Fred understood that he loved enriching our communities by working with young people, so he dedicated his time and energy by opening his heart and serving as a father to so many.

Fred was born on January 5, 1934 in Chester, Pennsylvania and spent his formative years in Woodlyn, PA. A graduate of Ridley High School in 1953, Fred continued his education for his undergraduate degree at West Chester University and master’s degree at University of Pennsylvania. Fred began his teaching career in 1957 as a junior high physical science teacher, where he also met the love of his life, Jeanne, who shared a mutual appreciation for classical music. They would spend time listening to all the classics while grading papers, and eventually, Fred convinced Jeanne to join his congregation at St. Matthew’s Lutheran Church as their organist. St. Matthew’s later served as the location of their wedding on December 28, 1963. You could also find Fred in the Sunday school classroom as a teacher, church council and education committee member, or in the choir pew as a member of the senior choir.

While Fred & Jeanne established their family home in Brookhaven, PA, they also enjoyed spending their time in Bethany Beach, DE. Bethany Beach was like a second home, with many family visits, life events, and memories made.

Fred’s love of music and the arts would continue throughout his life as a subscriber to The Philadelphia Orchestra and annual trips to NYC to enjoy Broadway shows with his family. You could always find Fred in the front row of his children and grandchildren’s performances, as their biggest cheerleader.

In Scouting since the age of 12, Fred served as Scoutmaster of Woodlyn Troop 43 for 60 years, personifying the Scout Law as an honorable, trustworthy, prepared, and godly leader. His scouting awards include the Scoutmaster’s Award for Training, the Order of Merit, and the Silver Beaver Award. When not at the cabin in Milmont, Fred could be found behind the movie camera as the Ridley Football videographer for over 50 years. For his service to Ridley Football, he was the first non-athlete to ever receive the Edward F. and William J. Burke Memorial Award as Sportsman of the Year in 2004. Fred was also a long-time member of the Masonic Lodge originally in Chester, PA.

Fred & Jeanne shared a love of travel and camping, visiting all 50 US states. On the road with his family, you could always find him behind the camera capturing memories. Once they both retired, you could find Fred and Jeanne on cruise ships to new ports of call with loved ones. Fred could be found supporting hometown Ridley football and was an avid supporter of the Eagles. He had a sweet tooth for anything chocolate and never tired of Turner Classic Movies.

Share Your Memory of
Frederick
Upload Your Memory View All Memories
Be the first to upload a memory!
Share A Memory