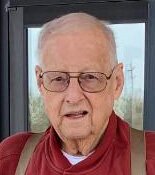 Robert George Jones, age 89, “Bob”, a lifelong resident of Delaware County, PA, died on Sunday, August 7, 2022.   Bob was a graduate of Media High School, Class of 1951, and a graduate of Drexel University with a BS in Accounting.  Bob was employed with Sun Oil Company for 33 years, and most recently was the Financial Director with the International Reading Association.

Mr. Jones was a proud U.S Navy Veteran, serving on two aircraft carriers during his service.

He was a vested member of the St. Paul’s Episcopal Church, Chester, PA.

Bob was active in his community and church, serving in many leadership positions.

Bob cherished his many family vacations in Ocean City, NJ.  He enjoyed shooting pool and playing golf.  Most of all, he was a proud father and grandfather and adored the times he spent with family and friends.

Bob met the love of his life, Betty, when they were young neighbors, and they married when she was 21 and he was 23. They enjoyed a loving marriage of 66 years.

In lieu of flowers, memorial donations may be made to:  St. Paul’s Episcopal Church at the above address.