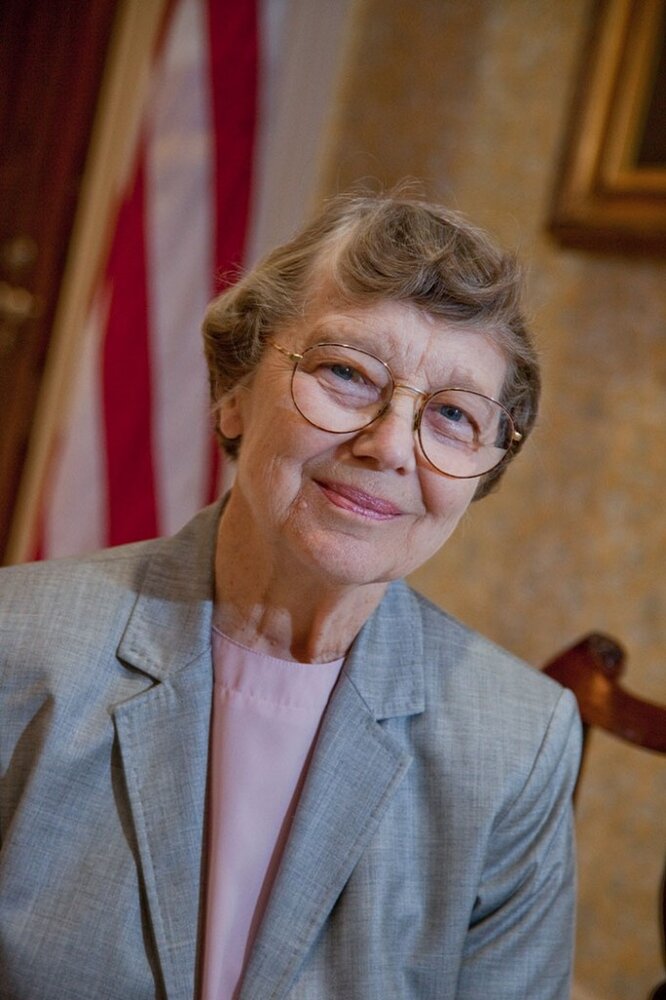 Obituary of Dr. Vivian A. Bull

Dr. Vivian Ann (Johnson) Bull of Madison, New Jersey, a former college president and professor, and a recognized authority on the Middle East economic issues, died Aug. 12. She was 87.

Dr. Bull served in numerous capacities and was a leader in opening new career paths for women in the corporate and educational fields. She was president of Linfield College (now University) in McMinnville, Oregon, for 13 years and president of Drew University in Madison, New Jersey, where she served for 32 years as an economics professor and dean. She was a recognized authority on Middle East issues, particularly relating to economics. She worked with her husband, archaeologist Robert J. Bull, on archaeological expeditions in the Middle East for 30 years. She served as a consultant to numerous boards and commissions, and as a trustee or director for churches, banks, colleges, and institutes, both in the U.S. and abroad. She was active in the Methodist Church and through her work was instrumental in the founding of Africa University in Zimbabwe. She worked in private industry, traveled, and lived in Europe, the Middle East, and Africa.

Dr. Bull was born December 11, 1934, in Ironwood, Michigan, to Edwin Russell Johnson and Lillian West, both immigrants from Sweden. Her parents were school teachers and her father was an entrepreneur.

She completed her education in stages, beginning with a small community college in her native Michigan. She earned her bachelor’s degree in economics at Albion College and then moved to Chicago and became one of the first women on the Chicago Board of Trade. She earned a Fulbright Award and studied at the London School of Economics. As an American scholar in London, she was invited to an audience with Queen Elizabeth. While studying in London, she had the opportunity to travel to Jordan and Israel to meet with the British Armistice Committee. There she met Robert Bull, a young archaeologist, and professor at Drew University. They married in January and made their home in Madison. During the academic year, they taught at Drew. Each summer they conducted archaeological excavations in the Middle East. In 1967, during one of those excavations, they were evacuated into Northwest Syria just before The Six-Day War began. A year later, the Israeli government offered Robert the site of Caesarea Maritima, where they continued excavations for the next 30 years.

Dr. Bull leveraged her experience in the Middle East when she began work on her Ph.D. at New York University, using her extensive knowledge, experience, and connections in writing her thesis – The West Bank – Is It Viable? It was used for over 30 years by the U.S. State Department because of its deep understanding of the Israeli political situation.

After completing her Ph.D., Dr. Bull worked for Bellcore, the research arm of AT&T, specifically on developing the touchtone for the telephone.

Dr. Bull remained an integral part of the Caesarea Maritima archaeological expedition. She founded the technical shed in Caesarea where everything was cataloged, enumerated, and created for research. She made sure the entire camp was operational and paid, all while trying to manage two young children running around in the great dunes of the Middle East.

Dr. Bull had a deep connection with the United Methodist Church and held numerous positions including the chair of the finance committee of the Board of Global Ministry. She was instrumental in the founding of Africa University in Zimbabwe which became an inspiration for institutions around the world. Over the course of many years, Dr. Bull flew more than one million miles, meeting with academicians and government officials sharing knowledge, offering advice, and inspiring the founding or growth of institutions in Vietnam, South America, Africa, Europe, and India.

In addition to serving as professor of economics at Drew University, Dr. Bull also served as associate dean of the College of Liberal Arts for many years. As a faculty member, Dr. Bull led Drew’s Semester on the European Community in Brussels four times, along with her many years serving archaeological expeditions with her husband.

In 1992, Dr. Bull was named president of Linfield College (now University) and served until 2005, the first and only female president in its 164-year history.

Her tenure was marked by unprecedented growth and change, with the university doubling in size from 78 to 193 acres, the construction of 14 buildings, a technological overhaul, major revisions in curriculum, and a record-breaking fundraising campaign. During her presidency, Linfield’s visibility and stature grew along with the campus. New faculty positions were added to serve a growing student body, leading to new endowments to support faculty development and student-faculty collaborative research. International study programs, already a hallmark of a Linfield education, more than doubled.

In the midst of this came a once-in-a-lifetime opportunity when Hewlett-Packard closed its McMinnville manufacturing facility adjacent to Linfield’s campus. She saw it as an opportunity to set the stage for Linfield’s next 100 years. Ultimately through a combination of purchase and donation agreements, the entire 105-acre tract was acquired by Linfield. The property now houses six new student apartment buildings, a new art center, a theatre and library, and a music center named in Dr. Bull’s honor.

One of her most beloved traits was her interest and willingness to talk with and listen to everyone’s viewpoint, from the top administrator to the custodial and groundskeeping staff. She had a particular wish not to be a burden to physical plant employees and could often be found washing the windows and weeding the gardens of the President’s House so that they were free to concentrate on the rest of campus. Her participation carried over into the McMinnville community, where she served on boards and committees, including the McMinnville Water and Light Commission and Downtown Association.

After retiring from Linfield in 2005, Dr. Bull returned to Madison. Soon, she was called upon to be the first female president of Drew University, which she had served for so many years. During her presidency, the Hall of Sciences underwent extensive renovations, and Drew began its partnership with the global education organization INTO to increase international enrollment.

Dr. Bull was a force to be reckoned with, whether negotiating in the old city of Jerusalem, haggling with the communist party in Vietnam, maneuvering through the complexities of world politics, or through the joys of small institutions. She was deeply loved by her family, her colleagues, and her friends who worked with her in many different capacities and who marveled at her enormous energy, time, and patience.

In 1992, Dr. Bull was named president of Linfield College (now University) and served until 2005, the first and only female president in its 164-year history.

Dr. Bull was preceded in death by her husband, Robert, her parents, 2 brothers, and 1 sister. She is survived by her sons, Camper of Media, Pennsylvania, and Carlson (Alexandra) of Baltimore, Maryland, and grandchildren, Eddie, Annalise, Camille, Jolie, Mikaela, and Alexander.

In lieu of flowers, donations to the Albright Institute of Archeology Research, Linfield University, or Drew University would be appreciated

Share Your Memory of
Dr. Vivian
Upload Your Memory View All Memories
Be the first to upload a memory!
Share A Memory