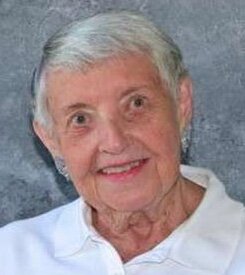 Evelyn Gardner Dean, age 98, of Media, PA, and Concordville, PA, passed peacefully on Sunday, August 14th after a brief illness.   A resident of Riddle Village and the wife of the late Francis “Diz” Dean, an aerospace engineer, aircraft historian and noted author who worked at Boeing Vertol, Ridley Park, PA.

She was a Philadelphia Phillies fan, enjoyed watching golf, and was active in the hospital auxiliary.  They were at one time residents of Concordville, Swarthmore and North Caldwell NJ.  Evie and her husband were originally from Marblehead, MA where they both graduated from Marblehead High School where Evelyn was later employed as a secretary.

The youngest daughter of Howard Percy Gardner and Mary Freeto Gardner of Marblehead, she had two sisters, Ruth and Helen and leaves a son Robert and wife Carol of Drexel Hill, two grandsons, two great grandchildren, and two nephews and a niece in New England.

Services and Interment will be private at Waterside Cemetery in Marblehead, MA.

Contributions in her memory may be made to Providence Animal Shelter, http://providenceac.org

Share Your Memory of
Evelyn
Upload Your Memory View All Memories
Be the first to upload a memory!
Share A Memory