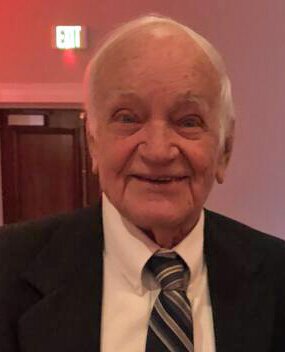 Dick was a Veteran of the United States Navy, enlisting in 1941, serving during WWII and Korea. He then was a member of the Naval Reserves, until retirement in 1980.

He was employed by Sun Oil Company, and later Scott Paper Company, for more than 20 years. Following Scott Paper, he was then employed by University of Delaware, until his retirement.

Cappy was active in volunteer fire service, where he was a life member of Lansdowne Fire Company #19., and also had served as the Borough Fire Marshall.  He was also a member of Viscose-Marcus Hook Fire Company and Aetna Fire Company of Newark, DE. Cappy was an active fire fighter well into his eighty's.

Dick was a former member of Penn Lodge #709 F&AM, he was also a member of  the Chester Royal Arch Chapter #256.

Cappy enjoyed traveling throughout the world, visiting Europe, Alaska and very often Florida. For more than 40 years, Elda and Cappy went to Hawaii annually. He was devoted to his family especially to his Grandsons, always attending their activities and sporting events.

Also survived by many nieces, nephews and in-laws

Funeral Service: Thursday, September 16th at 11:30AM at the funeral home, and a Masonic Service will be held prior at 11:20AM.

In lieu of flowers, memorial donations may be made to: Lansdowne Fire Company, 26 N. Highland Ave, Lansdowne, PA 19050 and/or Marcus Hook Fire Company, 617 10th Street, Marcus Hook, PA 19061.»(Do not delete this line. It does not print.  Text that is to appear on web must be entered before this line)

Share Your Memory of
Donald
Upload Your Memory View All Memories
Be the first to upload a memory!
Share A Memory